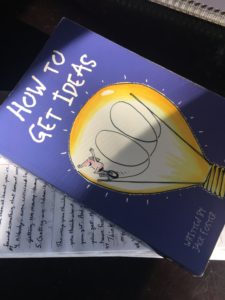 Sometimes you just pick up a business book and it turns out to be the right one to read. That’s what happened to me the other day on the way to a wedding rehearsal… I picked up “How to Get Ideas” by Jack Foster. It was one of those books I picked up from the Library book sale. The ones that have just sat there staring at me. What an amazing book! It was so easy to read and made you want to divide into his different suggestions to get started.

He put the definition in of idea that he most agreed with. “An idea is nothing more or less than a new combination of old elements.” Stop, read that again. Oh my gosh, that statement alone hit me with a ton of bricks. I guess I had never really stopped and thought about it that way. Getting ideas depending on you accepting what you think about yourself and your belief that the idea does exist.  He encourages people to visualize their ideas and to not be afraid of getting it wrong. He suggested several ways to help gain more ideas… Think visually. Think laterally. Don’t assume Boundaries that aren’t there. Set some limits. Define the problem. Do something about your idea everyday.

My favorite piece of advice from his book — “At first ideas are hard to find. Then they come in bunches. Don’t stop and analyze them. Write them down for analysis later. Don’t stop the ideas.”

Definitely one I’m putting on my list to read yearly!

Scroll Up
Scroll Up